The Quickening is Joyfully Recommended!

The Gathering is also Joyfully Recommened

King of Swords - A Dom for Christmas

Book 1 in the Dragon War's Series from Muse It Up Publishing!

Cody and The Elff

Coming soon from Muse It Up Publishing! 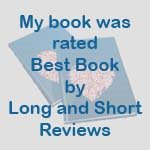 Most Excellent Review for The Quickening!

We're still going here with the New Year's Bash. Today starts our last full week. Can you believe the month is going by so fast? Today's guest is Brynna Curry!

Thanks for inviting me to be here today, Tir! I'll be giving away an ebook to one of the commentors. Winner's choice- Earth Enchanted or Gypsy Moon.

As Brynna Curry I write light paranormal romance and suspense. On the other side of the coin is my dark side, Brianna Roarke writing steamy dark paranormal romance. I feed my love of books as a book reviewer for You Gotta Read Reviews. I also judge several RWA writing contests a year, including the 'Molly', 'Gotcha', Fab5 and Reveal Your Inner Vixen contests and I'm the forth member of the Frightening Journeys blog writers. I'm married to my high school sweetheart with three teenagers and by day I'm a secretary for a construction company.


Have you ever wondered what it would be like to have magical abilities? I'm not talking about being able to fly, super strength or even invincibility. What if you could control water with the flick of your wrist? Create fire out of thin air with a thought? What if you could read minds, cure the sick? Shield someone you love from falling, drowning, being crushed by a car just by willing it? It's the most dangerous question in the world. "What if?"

Think for an instant what you would do with all that power. Would you use it for gain? Shun the gift as something other worldly and evil? Or would you embrace it with a child's delight and be thrilled with the good it could do, if you would only allow it? Now that you've found it, where did the magic come from? What if you discovered you were the descendant of a healer and a nixie-witch? What if the entire future of your family depended on you and your brothers breaking a thousand year old spell? Meet the Corrigans.

Liv Corrigan is a beautiful woman and a talented writer; she's also a telepath and must use her gifts to save the man she loves. Within her family lies a dark secret and a history of mages and magic. The Corrigans are both blessed and cursed with power. Ryan Corrigan chose to shun his gift after he lost his heart, now he must find his magic again if he is to save Liv's twins. Skye Corrigan, Liv's twin brother, revels in his power, but his gift is the darkest of all. Can he overcome the evil that walks within him, or will the healer and nixie be forever trapped in the mist?

Earth Enchanted is the first in a series of five books featuring the Corrigans from Ireland, a family with a ancestry of mages. Liv Corrigan, telepath and writer,visits her brother in the states only to find he's neck deep in a diamond smuggling ring. While there she meets ex-cop Jackson Roarke, a man with secrets still reeling from his wife's death. Here is a short blurb.

TAG: When telepath meets ex-cop, will it be death or diamonds

BLURB: Writer Liv Corrigan has the worst luck with men -- her telepathy tends to make them run for the hills. When she meets widower and ex-cop Jack Roarke, she decides to keep her talent hidden. Things are looking up until their third date crashes and burns as the man who murdered Jack’s wife turns out to be after him too.

Injured, Jack retreats with Liv to his house under armed guard. But with Liv’s mysteries rapidly coming unraveled, a diamond-thief killer to stop and passion in the air, the safe house is anything but safe for their hearts!


After EE, To Take Up The Sword flash forwards to the end of the trial for Ashton Smythe, Gueraldi's (the villian from EE) right hand man. When Smythe is set free, Agent Spiller (EE), convinced Serena Roarke hid more diamonds there, goes back to Alabama in search of missing evidence that would have convicted her killer. Leannan O'Neal, Serena's sister, goes into the wind after the destruction of her home and threats on her life. She meets up with Spiller and together they try to get the diamonds to safety before both are killed. There are a total of five books in this series. You can find out more about each book in the series by visiting my website and clicking the Elemental Magic tab.

You can learn more about the Elemental Magic Series and Brynna's other projects on her site or stop by one of her blogs and say hello.

My site
My blog and co-blog "Frightening Journeys"

I hope you'll drop by and visit with me!

Earth Enchanted sounds great and I have to say I love your cover for Gypsy Moon.:-)

Thank you, Kat! I like it too. Ash does a great job. The simple color pallete is somehow more striking with its simplicity. Out of every story I've written, EE is my favorite. Thanks for stopping in!

Hey, Tir! thanks for having me here!

Hi, Kat. You're the winner. Let me know which book you'd like.